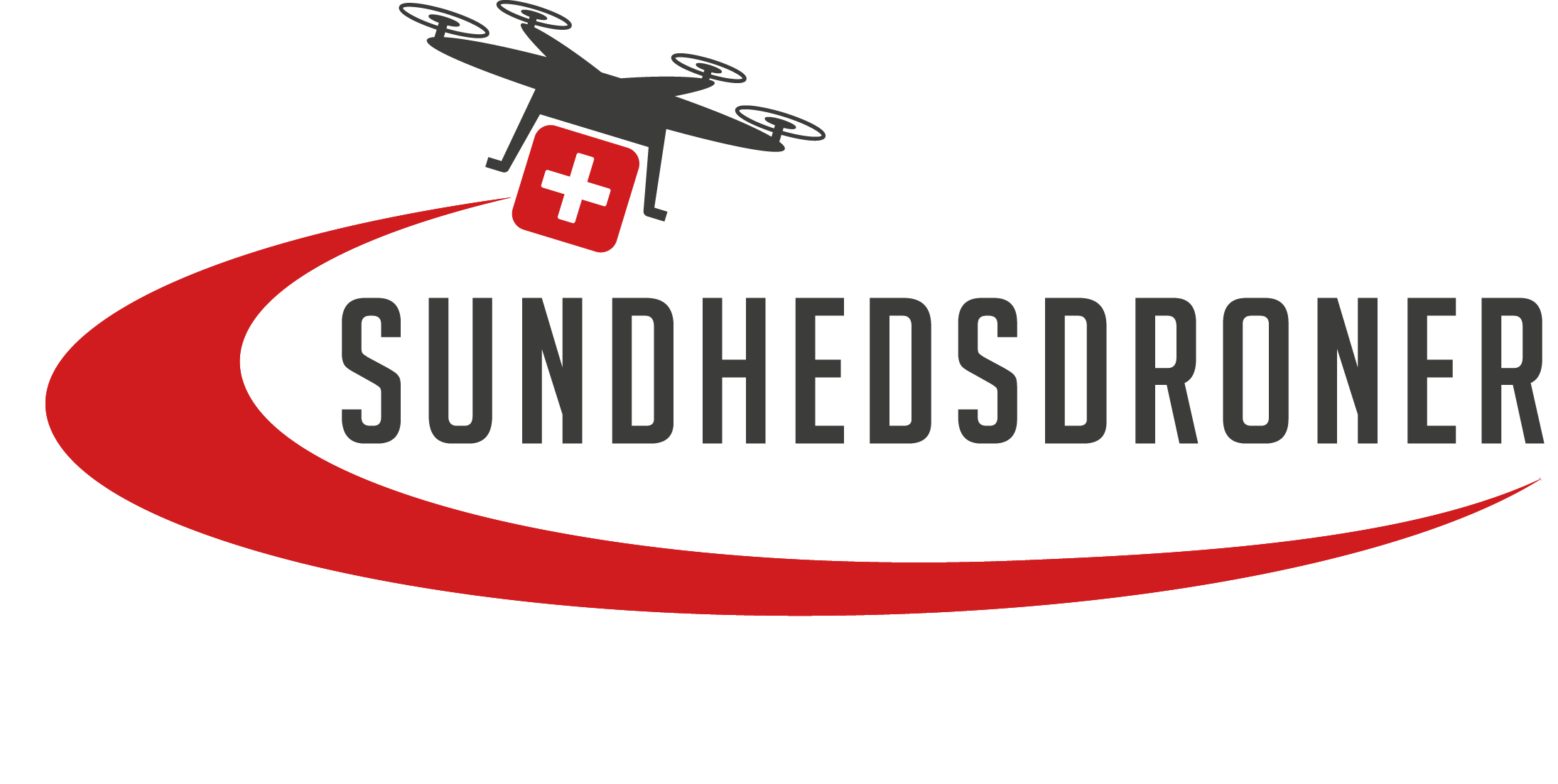 For three years, blood samples and medical equipment will be flown with drones between Odense, Svendborg and Ærø. Later, drones will also transport highly specialized healthcare professionals who need to arrive quickly. This will ensure better treatment and save the Danish health care system for almost DKK 200 million a year. 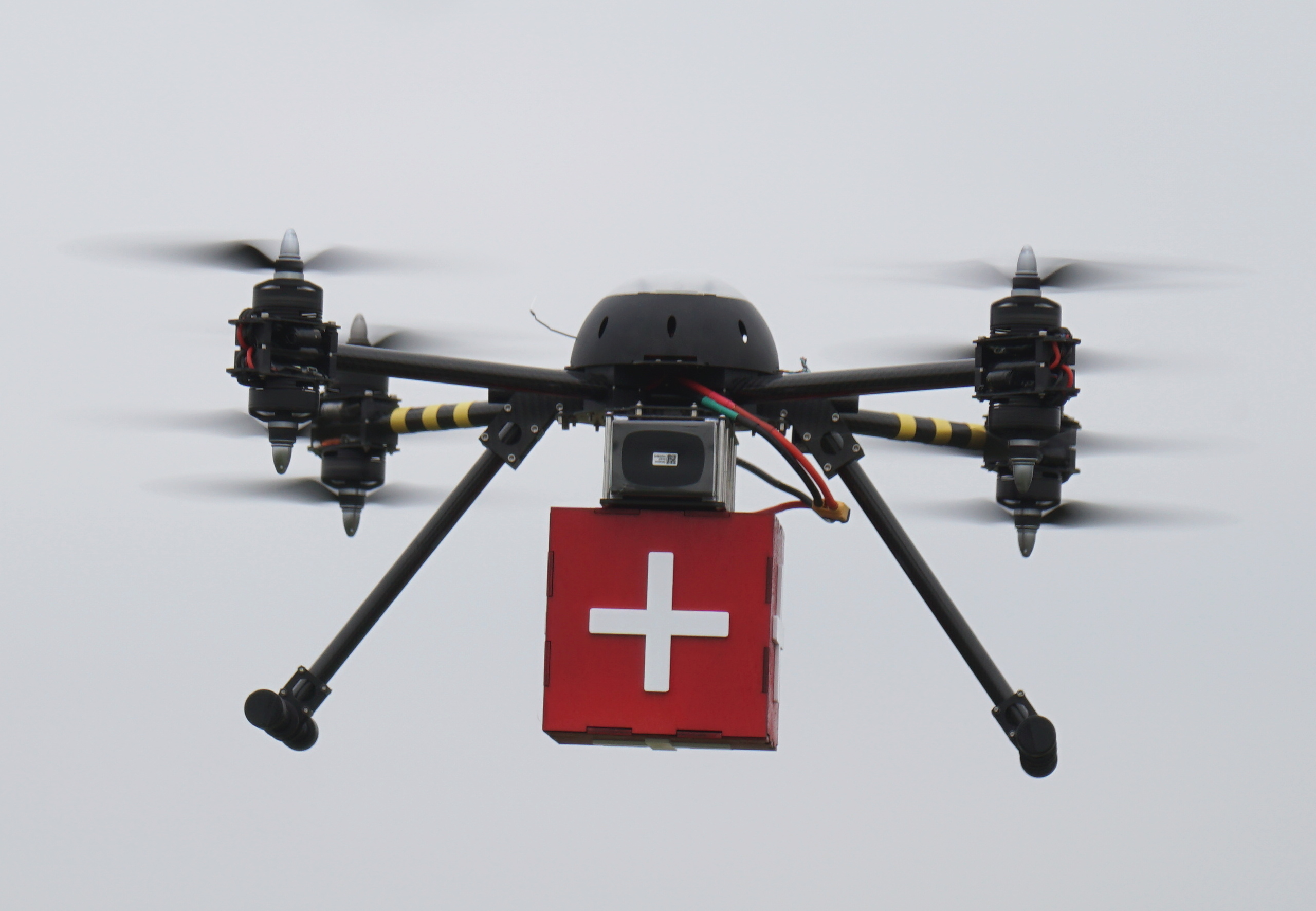 - Drones are to be the hospitals' extended pipe post system, explains researcher Kjeld Jensen from SDU UAS Center. He will be in charge when the project HealthDrone, with a grant of DKK 14 million from the Innovation Fund and a total budget of more than DKK 30 million, is to integrate drones in the Danish health care system.

- We see health drones as an untapped potential for helping a strained health service with fewer beds for ever more elderly people. At the same time, patients must travel ever longer to get under treatment. The smaller hospitals are shutting down and the number of medical centers is declining – here, health drones can help, says Kjeld Jensen.

During the three-year project, researchers, together with the companies Falck and Autonomous Mobility, will be testing flights with blood samples and equipment. At the end of the project, they will also test drone flights with highly specialized doctors, who may be acutely lacking in an operating room.

The initial tests of the health drones will be carried out in the airspace above Denmark's national drone test center, UAS Denmark, at HCA Airport near Odense. The drones will then be tested in flights with blood samples from Svendborg and Ærø to the laboratory at Odense University Hospital. Today, the transport time is an average of 12 hours, but the researchers expect that the trip will take three quarters of an hour by drone. 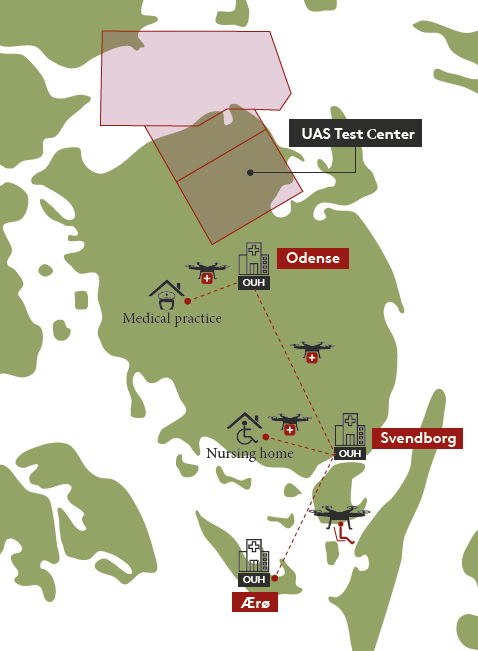 - When we’re talking infections, time is crucial, and when the blood samples arrive faster, we can ensure better treatment and we can reduce the use of broad-spectrum antibiotics. At the same time, calculations show that if the drones take over the tasks that are laid out in the project, OUH will save DKK 15 million a year, says medical director at Odense University Hospital, Peder Jest, who originally came up with the idea of ​​drones in the health sector.

OUH accounts for 7.5 per cent of the total hospital sector in Denmark, and if the drones were rolled out to all of Denmark, the estimated savings are DKK 198 million per year. At the same time, the researchers expect that there will be major savings on the climate account, because the drones don’t use gasoline or diesel.

In addition to blood tests, the drones will also help healthcare professionals by flying with equipment. Home nurses in Funen and the nearby islands often work with an ‘elderly-suitcase’ containing special equipment to detect, among other things, dehydration and infections. The suitcase costs DKK 120,000, so there are only six suitcases on Funen. But drones will be able to deliver medical equipment quickly when the need arises.

And one of the partners in the project, Autonomous Mobility, just can't wait to get on their wings. The company, which is already known for working for the deployment of driverless cars, has also embarked on the development of drones for transport and logistics.

- We expect to offer package shipments with drones within a short time. Already today we have customers and use cases that want regular deliveries when we are ready, and permits can be obtained. Towards the end of the project's three-year period, we will start making test flights with people, says CEO Peter Sorgenfrei from Autonomous Mobility.

Falck also sees great potential in the use of drones. Falck CEO Jakob Riis believes that initiatives like HealthDrone are important elements in creating a future-proof healthcare system.

- As an active partner in the Danish healthcare system, we are deeply concerned with developing the Danish health system together with the research and the hospital system and jointly finding solutions that both make us more effective and which benefit the patients. Therefore, it is obvious for us to participate in this ambitious project, where we can get the first valuable experience with health drones, says Jakob Riis.

Selecting the best drones on the market

The reason why the partners in the project are already ready to test drone deliveries in a few years is that the researchers don’t have to develop the technology from scratch. Instead, they will search the market for the safest and best solutions that already exist and only develop the missing components.

Since 2016, the company Zipline has supplied blood and vaccines to outlying clinics in Rwanda. The staff writes an order to the Zipline. 30 minutes later the delivery lands by parachute. Since August 2018, one of Iceland's largest e-commerce companies, the AHA, together with Flytrex, has tentatively delivered goods to people's front gardens in Reykjavik.

Amazon and Alphabet Wing are running other trials, but in the case of health drones, the most exciting experiment is in Switzerland where the company Matternet flies laboratory samples in a 20-kilometer corridor between two hospitals in Lugano, Switzerland. They have carried out more than 1000 test flights without any accidents, says drone researcher Kjeld Jensen and elaborates:

- In the project we will be testing the drones in flying out of sight, what we call BVLOS, in a corridor between OUH, Svendborg Hospital and Ærø. This requires close cooperation with the Danish Transport Authority which will be issuing the licenses. We must guarantee that the drones fly as safely as ordinary aircraft. The drones will be equipped with security systems that take over and land the drone safely if something unexpected happens.